Hybrid Microfluidic Circuitry–HMFC–are cross-platform devices that can utilize various layer materials in the microfluidics build process.  These materials may include a variety of the typical polymer adhesives and films or foils used today, as well as glass, polymer injection molded (PIM) materials, and possibly other substrates. The need to use such combinations in a layered stack can be a result of several requirement factors—sample size delivery, flow characteristics, ease of device assembly and commercialization cost—among others.

When considering the use of materials besides adhesives and polymer films, the ease of device assembly as a requirement for commercialization is a key factor. Manufacturing microfluidics cards using flexible materials and presented in web form is the most promising method for high-volume production.  Polymer films and adhesives have proven to fill many (but not all) of the needed requirements for fluidic channel purposes. Equipment such as the Preco FlexStacker™ takes advantage of material flexibility to deliver high accuracy and continuous, steady production. However, before getting to the stacking process, device assembly begins with the preparation of web layer materials in a separate roll-to-roll laser cutting process that also acknowledges that flexibility is important to automation success.

Glass has been going the route of flexibility for years. While companies like Corning, the Corning® Gorilla® Glass maker, has long been producing smash-resistant materials for Smartphones, their Willow Glass has demonstrated mind-bending tricks as well. Imagine having a 100-micron thick glass substrate and subjecting it to a bend radius of 5 mm! Naturally, an arc which is that severe is not necessarily the goal of a microfluidic chip, but the flexibility of glass isn’t the only trait that’s required. Creating channels that rival or exceed those made in adhesive/polymer sub-assemblies is a principal reason why a design house would choose a specific flow vehicle for solving a functional problem.

For example, polymer channel processing has been a job for CO2 lasers, creating traces in adhesives that are about 125 microns in width. Even though a CO2 laser is considered a “hot” source that creates heat-affected zones, but long-known laser technologies are getting new developmental interest for their capability to surpass the longtime standard for general laser work especially for glass processing.

Enter the ultrafast pulse laser source, such as a femtosecond laser.  Ultrafast pulse laser platforms are considered to have a “cool” ablation performance in comparison to CO2. While there are longer pulse rates in the ultrafast category such as pico or nanosecond, the femtosecond has the shortest pulse so far with a repetition rate of a quadrillionth of a second. This is beneficial for glass ablation as the beam is not allowed to reside on a spot for a comparatively long period of time. Adding to the relatively low processing temperature is the fact that the average wattage output is also lower than used for CO2 cutting or ablation of the usual plastic film materials.

Ablating glass with a femtosecond laser pulse will have several advantages over the conventional processing methods. The process will be faster than the typical etching times that are seen today. Masking layers may be eliminated as well as the associated wet chemistries. If or when vias or interconnects are required, micro-abrasive blasting can be avoided since the laser can provide both functions.

Knowing this, femtosecond laser processing demonstrates that depth control is adjustable to the needs of the capillary. Considering that the aspect ratio of the adhesive/polymer scenario is around 5:2 (adhesive thickness is usually about 50 microns) for example, laser channel widths can be as little as 16 microns with equally controllable channel depths or greater. In other words, a lot more freedom for adjusting widths and depths for volume control will be possible.

Overall, lasers and flexible web processing will have an advantage over a glass microscope slide format and many other rigid glass sizes that are used today. A process that facilitates increased throughput and ease of process is needed for scaling up for the expected surge in microfluidics production. The laser processing that’s done currently in polymers and adhesives can be supplanted with flexible glass substrates and newer-developed laser capabilities. But as always there are some caveats. The properties of these mixed materials are different, and weighing the benefits to the device performance ought to be recognized. The possibilities should be considered “available” when a hybrid situation arises for its use.  Then again, why not a complete stack of flexible glass? ​​​​​

Share:
Care Points: The Current State of Point of Care Diagnostics
White Paper: How to Assemble Your Microfluidic Test Device 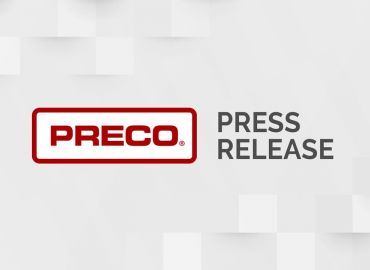 It is with great sadness that Preco, LLC announces the passing of…